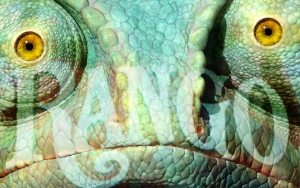 Johnny Depp and Pirates of the Caribbean director Gore Verbinski’s latest collaboration takes place far away from the storming seas that the Black Pearl swayed on and finds itself in the deserts of an unknown location, likely somewhere in California or Arizona.

Depp plays Lars a lizard in this animated feature who creates plays with inanimate objects while in his cage as somebody’s pet. He longs for meaning, for some sort of tension to occur in his life outside of his plastic environment. His wish comes true when his cage is thrust from the vehicle he rides in (no backstory is given to his prior life) and he is forced to survive in the desert. A place, that technically, he is made for, but has yet to ever live in.

As the story continues, he eventually finds a town called Dirt, where he makes up a new identity for himself, a tough cowboy like figure named Rango. After a few accidental victories over the town’s bullies and a bird that haunts the town, he is thrust into the sheriff’s position; one that apparently is refilled often.

The town is in a water crisis and with the water supply running low, it is up to the sheriff to both protect the existing water supply and to look out for the people he rules over. Of course, he is not alone in this and in charge of the town is the mayor (voiced by Ned Beatty), who controls when the water is to be given out.

From here, the plot is fairly predictable. There is a corrupt leader, our hero tries to save the day but somehow fails and ends up revealing that he is not the hero he claimed to be, he is thus outcast while the town suffers at the hand of the corrupted leader, the hero realizes that within his true self he has the ability to save the day (and figures out the key to the whole problem) and returns to face his fears and the corruption that lords over the town eventually getting the girl in the end.

Its unoriginal plot structure wasn’t the most pathetic I’ve ever seen, but when you’re sitting in the theater trying to determine how much time is left based on what point the movie is at in the typical hero archetype, you know there is some sort of a problem.

Rango never really seemed to add up. Subtle parts that seemed like they would come back to mean big things thematically, never really appeared again. There are certain shots, characters, and interactions that would have lead down interesting paths had they been pursued, but evidently Verbinski wanted a more cookie-cutter like film. It seemed like it either wanted to go a lot deeper than it did and failed, or they had to cut scenes out for time/marketing purposes.

Depp is great as the voice of our false hero and the animation is fantastic. The filmmakers really attempted to go for something different animation and editing wise and  this was certainly successful, giving the film a more artsy edge to it than its other animated competitors. Just Rango himself looked amazing, and it is a wonder how they were able to make his eyes look like they did. If only they would have put more of that focus and originality on the plot, we could have had a pretty good film on our hands, instead it turns into a run-of-the-mill animated film that is not really worth recommending.