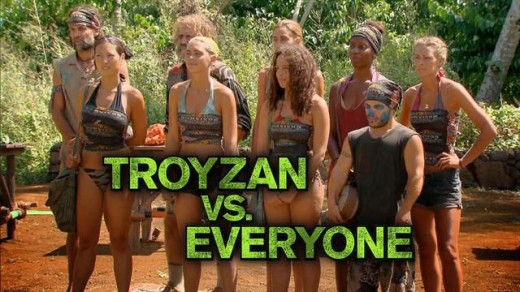 This week on Survivor was an interesting one, as we saw little of the actual bootee and instead had all the focus on one person taking on the rest of the entire tribe. It was Troyzan vs. everyone this week from start to finish. Troyzan definitely played up the victim’s role and complained the entire episode about being on the outside. Eventually, thanks to an advantage in the challenge, he went on to win an immunity, forcing the girls to vote out Leif, despite Troyzan’s effort to gather those at the bottom to against Kim.

Did Troyzan shoot himself in the foot?

Strategically there were many flaws and missed opportunities this week. The first being the aforementioned self-victimizing that Troyzan did the whole episode. Troyzan definitely did not benefit himself in any way by whining and subsequently gloating when he won the challenge. Doing this he definitely, as Survivor blogger Superjude stated in his blog, made himself a replica of Terry from Survivor: Panama. Like Troyzan, Terry was the final member of his alliance left to fight for immunity each week. Terry did end up winning every immunity except for that fateful last one, making him finish in 3rd place. Also like Troyzan, Terry carried this attitude with him the entire time so that when the other alliance (Bruce, Aras, Cirie, Shane, Courtney, Danielle) had to eat itself, they simply ignored him and worked around his plans.

Troyzan was right in his attempt to get the bottom 4 to flip. Most times in Survivor, being the one to flip is not the best move to make. Case in point, John Cochran from last season or the fact that the nobody who has ever won has ever really flipped against their alliance (think about it, it’s true). Where Troyzan went wrong is forgetting that Survivor is grounded in personal relationships, not merely chess pieces to move across a board. So when you act cocky and shove it in everyone’s face that you will win immunity every single time, you are not doing anything to gain anyone’s favor.

I think that if I was Tarzan or Christina or Alicia I would have tried to bond together, because it probably would have been a good move. But you can’t forget that those 3 have probably all been guaranteed a spot in the final 3 and have been guaranteed that spot for a long time (like Alicia who in staying with the girl’s alliance is sticking with a group she has been with since day 1!). It is not that crazy to think that Kim or Sabrina will want to take at least 1 of those 3 to the finals with them, so this new alliance really seems more like a shot in the dark for them, that mad scrambling angry Troyzan is doing to save himself more than them. This is why it is so important in Survivor to maintain relationships with people that are not in your alliance at the chance that you need to work some magic and get other people to work with you. All this being said, they still should have flipped (it would have been like Marquesas repeat).

Making everyone feel so confident in their group is one of the reasons why Kim is playing such a great game (something I will attribute to Kim, since Chelsea doesn’t really seem smart enough to pull this off). If she wins this season, she may have played the best winning season by a female ever. I mean, who is better than her? I could see arguments for Parvati, Sophie, or Tina, but every other female winner played under the radar. Sandra is definitely in everyone’s top 5, but that is more for overall accomplishments than individual season prowess. Kim is nailing it this season and I love watching her. While Chelsea and Sabrina argue and yell, Kim sits their with her mouth silent, before making a well thought out statement that keeps everyone under control. It reminds me of Yul playing the diplomat in Cook Islands or Brian just sitting back having everyone bring information to him to listen to.

Can Kim actually pull it off?

While her gameplay continues to improve, I see her shot of winning going down and down. One reason for this is her edit seems to be a little too perfect. She is all strategy all the time, something that is very similar to what we saw in Sash in Nicaragua who was then blanked in the final tribal vote. Is Kat going to be the Fabio winner, defeating Kim (Sash) and Chelsea (Chase)?

Another reason I am worried about her winning, is I am not convinced everyone knows that she is pulling all the strings. I have listened to and read several interviews of all the jury boots and none seemed to acknowledge that they knew she was the glue that kept everyone together. Not Jonas, Michael, Jay, or Leif. They all seemed somewhat hesitant when talking about it and reluctant to admit that she was doing it. I also remember a shot of Kim saying that she thought the jury would recognize that she was the one who played better, but maybe this was foreshadowing what would end up making her lose. I don’t know what to make of all of this, but it should be interesting to see whether things happen straight forward or they try to shake things up.

The auction was back this week for the first time since Tocantins (I think?). Troyzan partially played the auction brilliantly and partially idiotic. It is great to see someone thinking strategically during a part of the game that isn’t as obviously strategic. Knowing that he was at the bottom and that usually they offer some sort of advantage in the challenge, he was wise to save his money to buy that advantage. It really was a great play on his part, especially since so many people take their mind off of the game during parts like that. But his starting bid was only $300?! If Christina had any idea what she doing he would have totally screwed himself over by bidding $200 less than the maximum. Did he think that nobody else would want an advantage? So Troy, I give you credit, but also not.

How will the remaining players do?

Christina is destined to be the first woman out, there is really no doubt in my mind anymore. Alicia is an interesting one, because I really do think she has a mind for strategy , so she could go at any time. I think Kat is top 5 for sure, probably even top 4. Sabrina will get anywhere from 7th to 1st depending on how soon and if they make a move to get her out. Chelsea is also interesting, because she butts head with a lot of different people, but we have seen so much of her and she really does seem likeable. It is hard to get a read on what everyone thinks (Leif in a post-boot interview said he didn’t like her). Tarzan really could go at anytime as well. I think Troyzan’s time is limited. He has to win or he’s done and there is no way he will win every immunity and there is also no way he will convince anyone to join him.

I am really enjoying this season. There are some solid people playing the game and although it seems as if it is going to be predictable (the order being Troyzan, Christina, Alicia, Tarzan, Sabrina, Kat, Chelsea, Kim) it leaves a seed just big enough in your mind to make you wonder and that makes it a good season.