Hip-Hop vs. How I Met Your Mother 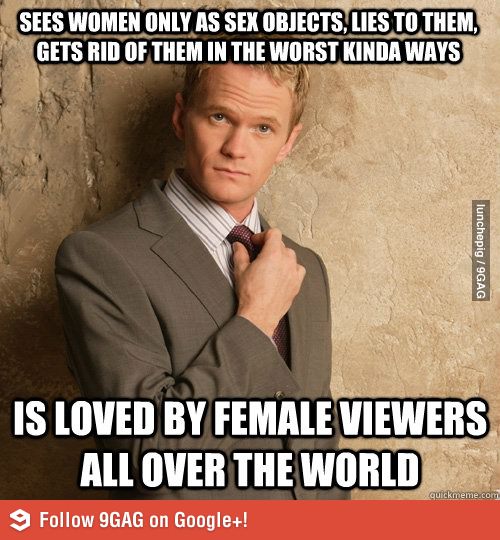 I found this image here

(note: this post is meant for and comes from an outside and likely mainstream view of hip-hop. Please let me know if I generalize anything or come across as ethnocentric in any way, I will take your criticisms and evaluate them and my perspective on the world. Thanks)

I think there is a trend happening for those out there who engage and critique popular culture from a moral and critical perspective. Those who study, think through, or all together avoid certain artistic works because of the content that is presented. The trend, which may have existed for decades thus making it not a trend, is to avoid or criticize rap and hip-hop artists and songs for being misogynistic and self-glorifying. While I think there is merit to such a claim, I want to push back against it, and criticize other widely accepted parts of pop culture, namely, CBS’ long running hit show How I Met Your Mother.

First, I think we must look at hip-hop’s roots and history in order to discover where it is coming from. Without doing this, there is little to no right in passing off judgements on its merits or meanings. In his series of posts for the AV Club music and pop culture critic Nathan Rabin discusses his early love for hip-hop and the way that the genre shifted year after year. Rabin notes that when NWA released “Straight Outta Compton” in 1988, it felt revolutionary, that they “dared audiences to hate it”, and it “became a victim of its own massive success and influence, as its innovations long ago devolved into tiresome clichés”.

Like rock ‘n roll and punk music before it, hip-hop (or gangsta rap) thrived because it was new, it was angry, and it allowed young people to express something that they weren’t able to express before then. But, like most things, when something feels revolutionary it is soon co-opted by the mainstream; by marketers looking to make money off of the hottest thing. While to this day there are innovative hip-hop albums being created, perhaps much of where the criticism comes, is in the cliches copied by those wanting to emulate groups like NWA.

The members of NWA were teenagers, they were trying to figure out how to make their way in the world and did so by using their gift of artistic expression. Rabin expresses this by saying, “they’re living out the sociopathic fantasies of angry teenagers everywhere in a realm where they possess all the power.” They created a world in which they have the opportunity to make and express something big. They, like most teens, did not make the best or safest decisions, but they made something that resonated with people around the world.

So then when we think about hip-hop we must remember where it was birthed from. NWA came out of Compton (straight out of there), a place that to this day is hardly known for being a safe place for the whole family, but it is the reality from which they came. Author Misha Emanoil expresses this saying:

“Lil Wayne is the artistic symptom of poverty and the societal ills it creates, not the cause. Believe it or not, most people, even the disenfranchised poor, want to be good, successful citizens and will not try to emulate these artists.”

From then hip-hop has grown to the point that a sort of pop-rap has become huge in clubs and on radio stations everywhere. It is certainly sexist at times, but part of this is due to consumeristic driven markets that co-opt the types of expression that young and sometimes poor people made in the late 80s and early 90s.

Moving beyond the roots of hip-hop, we turn now to the nature of the art form itself and how this amplifies the sexual, violent, and misogynistic appearance of its lyrics. Hip-hop, by nature is a far more expressive genre. While I have no empirical evidence to cite, I would bet that the typical hip-hop song averages more words than that of a rock or pop song. The speed of which the lyrics are sung is so much faster that other genres that it requires this (that’s what rapping is right?). With more lyrics to write, rappers have to be much more expressive than other lyricists, making sexist themes much more obvious. My point here is not that rap is not sexist, but that other types of music are and do so much more subtly, which to me is much more dangerous. If you need proof of this go look at the lyrics of rock classics such as Poison’s “She’s My Cherry Pie” or Def Leppard’s “Pour Some Sugar on Me” or AC/DC’s “You Shook Me All Night Long” all of which get played in public on a regular basis, yet insight little moral outrage.

One of television’s most beloved characters at the moment is How I Met Your Mother’s Barney Stinson who Wikipedia describes as “a serial playboy, [who uses] his wealth to seduce women for sex with no intentions of engaging in a relationship”. Hold on, what? This is a character for which Neil Patrick Harris has received four Emmy nominations and a Golden Globe nomination? This was a character that Entertainment Weekly named one of the top 100 of the last twenty years?

I get it though, backstory, backstory, backstory. I get that his father abandoned him. I get that he has had things happen to him that made him who he was. I get that. I just spent the last few paragraphs talking about how we shouldn’t do that. We have to ask ourselves if we are treating both the same? I realize that there are some people who love both rappers and Barney Stinson for their playboy tendencies, I mean Hugh Hefner is a bonafide celebrity right? But for those of us who do think critically about these things do we treat both the same?

I really don’t think Barney Stinson is such a beloved character because of how well rounded he is. No, its the catchphrases, the “bro code”, and how charming he is, while we ignore what Wikipedia so blatantly points out that he is “a serial playboy, [who uses] his wealth to seduce women for sex with no intentions of engaging in a relationship”.

Finally, I want to address the notion that hip-hop artists are obsessed with themselves by looking at Soong-Chan Rah‘s study of religious music in different cultures. The stereotype is wide and perhaps somewhat true, rappers brag about their wealth, their status, and other conquests. Their music videos are filled with hot women, gold chains, and shiny cars as they rap about how great they are. It’s a pretty obvious cliche.

Rah writes in his book on cultures and the Evangelical church about the differences and the need to reconcile the average predominantly white church and minority churches. He talks about the religious music in each, noting that while white churches tend to be more affluent, lyrically their worship songs are based in suffering and pain. Those in minority driven, poorer churches are much more celebratory and thankful. While this isn’t an exact parallel, perhaps some wisdom can be gleaned from Rah’s observations.

Notice two genres that began to come into prevalence around the same: hip-hop and emo.  The former features usually poor African American youth, the latter usually white suburban kids. One is notorious for its songs about wealth, one for songs about sadness and depression. Where does this disparity come from? Why do rich white kids sing sad songs while living in places of abundance, while poor African Americans talk about how great they are? I am not here to give an answer to this; simply to point out a trend.

I guess I hope that instead of pointing out the flaws of others, that we would instead begin to see the flaws in ourselves and work to change those. No culture or subculture is perfect, the world is rife with injustice and we should call it out. In calling it out though, we need to remember to think through our reasons, to check for prejudices, and to see if we can see the world from the other’s perspective. Then we can a make a point and then we can work together to change all that is wrong.