120 Days: Syria and The White Helmets

I’ve decided in response to the current administration’s decision to ban refugees from Libya, Iraq, Iran, Somalia, Sudan, Syria, and Yemen, I am going to watch (and maybe write about) a movie by or about one of those seven places. Movies are among the easiest and most popular form of escape in our world, giving us the ability to transport ourselves to all sorts of places and, perhaps most importantly, into the perspective of another. While they only paint small visions of the world we live in, they expand what we think is possible and what we know of people. 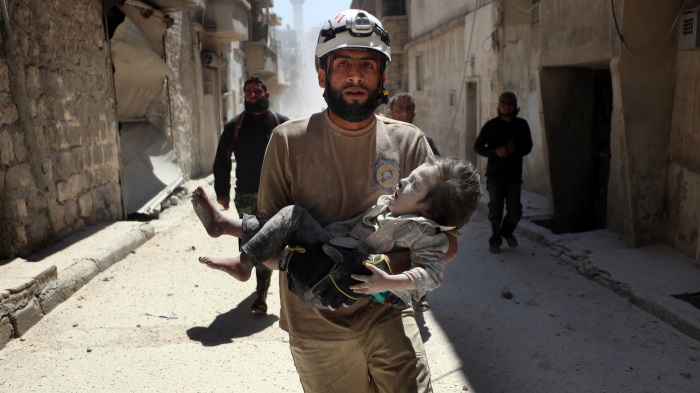 The first film in this series is The White Helmets, a 2016 documentary short about a group of people in Syria who run into bombings to save anyone possibly injured in the wreckage. The film has made news in recent days, because the heroes it features are no longer eligible to enter the country, not even to potentially receive the Oscar for which the film that features them has been nominated. I should also note that there are some who argue against the featured group, laying out all sorts of reasons why they are illegitimate, it doesn’t seem to be from any serious sources, but has certainly lowered the IMDB score of the film. It serves as a good reminder that all documentaries should be taken with a grain of salt though.

The film reminds me of the saying attributed to Mr. Rogers: “When I was a boy and I would see scary things in the news, my mother would say to me, “Look for the helpers. You will always find people who are helping.” It’s a modern rendition of Hacksaw Ridge, with only their helmets and short training the heroes run into the danger zone, saving life after life.

The filmmakers, for their part, dive straight into the action, with more than one cameraperson knocked aside in the midst of chaos due to an explosion of some sort. They follow each of their subjects as they enter into war zones, responding on a moment’s notice—at the first sound of explosions. Each White Helmet shows extreme dedication to their cause, filled with part adrenaline, part duty. They frantically try to make sense of what has happened, running about trying to figure out what their response should be, yet there’s a normalcy to it all—this is what they do.

There’s no sense of triage here, they’re there to rescue anyone with any chance, moving forward with fiery, throwing all naysayers aside. This lack of fear and unbridled bravery has lead to them saving thousands of people—when it comes to saving human lives, sometimes all logic should be thrown aside.

There’s a moment where one of the people in the film states ”All lives are precious and valuable”, bringing to mind a saying that’s often uttered in strange defiance by that collection of trolls; if they had any integrity then perhaps their lives would look more similar to the quoted man whose life embodies everything spoken.

But our lives are so easily shaped by where we’re born, the circumstances in which we’re raised, and the opportunities we’re given. In the movie there’s a moment where they literally snatch life from death’s grip, miraculously pulling an infant out of the rubble. It’s in that moment that I could not help but think of what would become of that child’s life or any child living in those times. This child serves as a beacon of hope for those brave men risking their lives, and because of this, likely would be given everything he needs to make it in this world.

But what for the child whose parents are killed in the wreckage by bombs from the west? What of the children of the White Helmets whose parents are constantly at risk? What if they make that impossible choice to leave Syria, joining alongside the millions of others who have chosen to flee the danger that is insurmountably presented to them on the daily, and what if they find themselves rejected at the border as our policy has forced us to do?

The absolute obliteration of war and a world without hope causes people to make choices, to blame outside forces that were seemingly playing war games at their expense. Would it be any surprise to see these individuals choose religious extremism? It’s the only choice they have. This is where the executive order goes wrong, creating largely unwarranted fear in Americans, and letting broken individuals stew in their suffering with no path to redemption.