This morning my son was sleeping, so I made a mad rush to complete all the tasks I had set for myself, a combination of daily duties like showering and eating and all the culturally nerdy things I had wanted to accomplish: finish The Killing of a Sacred Deer which I had rented for free on Redbox and needed to return this morning (oh boy this movie might Yorgos Lanthimos most disturbing movie despite his other works including an incestual cult and dystopian world where love is violently enforced upon singles. It’s tonally and cinematically excellent though I don’t think it accomplishes anything thematically.), read Matthew Yglesias’ piece on Russia and Trump, and prepare for the latest episode of Good Taste.

These things pile up and I often set myself for failure by wanting to consume too much. I’m a pop culture glutton and I wonder how this will be passed along to my children. I catch myself fantasizing about my child knowing all the cinematic classics, ripping through the children’s literary canon, being able to namedrop Miles Davis, A Tribe Called Quest, and Courtney Barnett, having a favorite Sondheim show and lyric, puling off comedic bits and wordplay, being a slight history buff who’s politically literate, playing baseball while being able to site his favorite player’s year by year WAR, and advocating for social justice issues while preparing chilaquiles that inspired him when we went to the taqueria the night before. Oh and he should also have his own unique interests and personality.

Right now all he wants to do is put stuff in his mouth–which is great.

This is where you take deep breaths, say a prayer repenting of selfishness, and remind yourself of what you really want: compassion and curiosity. Go from there.

What we listened to on the way there: The Black Panther Soundtrack, a Kendrick Lamar catered soundtrack? How could you not? Listen to my thoughts on it here. 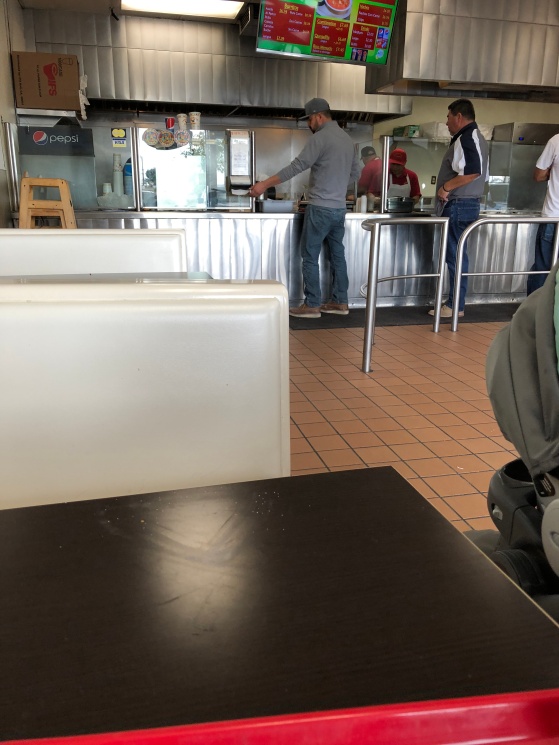 Taqueria de Anda is building its empire off of simplicity, expanding across north Orange County with its traditional burrito and taco based menu (there’s apparently two different Taqueria de Anda’s that are both expanding and I can’t figure out the difference). Food is ordered via an assembly line of varying meats that tasted fresh despite sitting in serving trays.

The tacos were served classically, two corn tortillas topped with each respective meat, onions, cilantro, and salsa; limes on the side. I opted to split between their two salsa options, both green and red. The carne asada and carnitas were both a little dry, though each had great flavor. The cabeza almost had the opposite problem, extremely moist and fatty, there was an almost nutty flavor to it. If you don’t like fatty textures, it likely wouldn’t be worth ordering, but that flavor is real good.

The star here again was the al pastor. Texturally perfect and featuring an exquisite blend of spices, al pastor is the #QUEEN of taco fillings and at Taqueria de Anda that’s no exception.

My son’s thoughts: He stared at me quite seriously throughout the whole meal. I took him home and he fell asleep on my chest for the next 2.5 hours.