One of my favorite genres of movies is what I like to call the Sunday Evening Flick. This is a movie that most of the time you don’t think about watching and you probably wouldn’t rave about it very often, but when that Sunday evening comes and you’re presented with various movie choices, this is the one you’re choosing. This can either be something that is playing on television or something that you’ve already bought just for this occasion. I pretty much only buy five dollar movies from Target on this principle alone, otherwise it’s not worth it. I would at times rather buy a Sunday Evening Flick than something that I think is a far superior film (which brings up the debate about which is the actual superior one…). I would rather watch George Clooney and Michelle Pfeifer in One Fine Day most Sunday evenings over Jeff Nichols’ 2007 drama Shotgun Stories though I think the latter is the far better film. It’s a genre (and yes I’m calling this a genre, though it is quite subjective) that defies logic often by pulling at some sort of bias in you–sappy love stories, cheesy comedy, nostalgia, etc…

The film presented in this month’s rewatch is not one that I would usually place into my Sunday Evening Flick category, but it shows just how fickle these things can be. I associate it with Sunday Evenings, because I would watch it on Sunday evenings. I never owned or rented this movie, but several times a year it would appear on some channel playing movies (I’m gonna guess TBS) and if it was on I would watch it. The combination of brightly colored costumes, sci-fi action, and Bruce Willis probably attracted me to it and I grew very fond of it even though I’m not quite sure I had actually seen it from start to finish in one sitting. I probably hadn’t seen it for at least five years and I always wondered whether it would make any sort of impact on my more sophisticated mind all these years later. Was I clouded by bright colors and Milla Jovovich running around in skimpy outfits or is this film actually good?

Let’s start off by saying that this movie is definitely not cool. I talked about how The Matrix retains some of its cool despite its outdated cyber-punk internet age in a previous post, but The Fifth Element does not have any of that despite being released just two years prior (1997). This was a strange time for those releases and The Fifth Element proceeded both The Matrix and Star Wars: The Phantom Menace two of its genre and style compatriots. Element lines up more with Menace, though that is perhaps because Menace turned out so unintentionally campy, while Element brings on the full force camp. This movie is definitely not cool–it’s not trying to be.

I’m not sure if I liked or disliked most of the film. It’s knowingly goofy while showcasing parts that would typically be seen as “cool” action set pieces and sci-fi costuming. It doesn’t take itself seriously (I read someone compare it to Burton’s Batman and I think that is an apt comparison, though I don’t like that movie) and that allows you to distance yourself from the crazy things that are happening on the screen. It’s such a mish-mash of tone, but that doesn’t kill the film and that’s probably why I liked it as a kid (I was someone who would mix all the sodas from the soda fountain in what we called a “Suicide”). 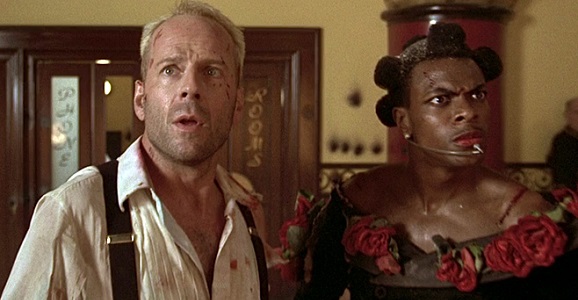 The performances here are mostly ridiculous from its fairly star-studded cast. Gary Oldman takes on the villain role, sporting a long black comb-over along with high collared suits and a soul patch. He’s the kind of villain that is quite silly in his maniacal ways without ever crossing over into full comic book parody. Ian Holm is a priest–one who has all of the answers–but never seems to be able to put everything together due to his sort of clumsy demeanor. And then there’s Chris Tucker doing Chris Tucker times a million all while dressed in futuristic women’s clothes. It’s hard to say whether his character: Ruby Rhod, an effeminate futuristic entertainment host, is progressive or archaic; unique or embarrassing. He’s somewhat funny–his radio narration of the final battle scenes are charming–but his high pitched ramblings grate. I think that he contributes to a more realized setting, showcasing celebrity life in the sci-fi future. He’s a sideshow that never becomes an interesting character, while still adding to the film.

Milla Jovovich of course stars at the titular Fifth Element—a supreme being who takes the form of a human woman. I remember her character being an epic representation of a dominant female character, from her ability to retain information to fighting off those trying to destroy the earth she was ingrained in me as an action hero. I thought I would love her character once again, but I was left sorely disappointed. For the most part she stumbles around speaking gibberish in a half confused state, while director Luc Besson seems to want to use her for her sensuality rather than her capabilities to dominate (I mean, she is literally the key to saving humanity). It’s disappointing because in my memory I had seen her as a Furiosa-type, but she doesn’t live up to this. I still think she is iconic (mostly due to her costuming and makeup) and she becomes more and more autonomous by the end of the film, redeeming herself and the human race.

The most grounded character and true hero of the film is Bruce Willis. He takes all the hyperbole and brings it back to reality. He’s a former military hero who is now barely getting by as a cab driver do to his brash personality. It’s a character we’ve seen Willis do time and time again, but it’s an essential role to the film. Willis is a charming tough guy and he steadies the movie while surrounded by cartoonish characters. It’s obvious that he will save the world and get the girl–who else is there to do it? But who else would you want to do it?

The plot is semi-convoluted with its ancient mythologies, villains and heroes whose motivations are never quite clear, and lots of pieces that seem to come together out of convenience rather than logic, but none of that really matters. All that needs to be known is that the world is about to be destroyed, this is the person who can save it, this is how they can save it, and that Bruce Willis will ultimately come to be the hero. This isn’t a Christopher Nolan movie where the pieces fit together like a perfect jigsaw puzzle–there’s a bunch of stuff that doesn’t matter, but all of that stuff is the most gratuitous fun.

In the end I think we really have to go back to Phantom Menace. I wonder if it wasn’t a prequel if it would be a more fun experience like this film was for me. Both are frivolous forays into strange fantasy worlds where weird creatures interact with humans and people have strange powers. Element succeeds without the pressure to say much or to contribute to a larger world (it also uses practical effects and CGI better than Menace in my opinion). This brings up questions as to whether Menace would hold up, being erased from the rest of the Star Wars canon, and this is a question that one day I will come back to; for now I’m too busy reeling from the (excuse the cheesy saying, but it a movie like this makes you use awful sayings in complete sincerity, because the movie itself is awfully sincere in the most fun and cheesy way) rollicking good time I had watching The Fifth Element.